As we explained in our Level 2 Online course on Mental Dowsing, Vibratory Radiesthesia and Pendulum Healing, as well as in our Space Clearing Online Course (only in Spanish for now), the Phi symbol has been traditionally used in some branches of geobiology to help harmonize information toxic that can circulate through the Hartmann grid network crossing our living spaces.

The Hartmann network is very interesting because it can be used to transport information for both good and bad. When dark rituals are performed and connected to the Hartmann network, sadly their information circulates throughout the network that surrounds the entire Earth, crossing through our bedrooms, kitchens, study and work spaces for example.

Places where wars, murders and other cruel, dramatic situations have taken place, maintain toxic and dense information in the fabric of the Hartmann network (as well as in the Curry network) causing geopathic and psychic-spiritual disturbances in the area if nobody proceeds to clean up that dense information. We have been able to verify this in areas of northern France where there were battles, struggles and the homes in the area that have not been cleaned carry the weight of this information.

We have created and designed a harmonizing disc with the Phi figure surrounded by the golden number that can help us when we combine our intention, the force of the energy of the disc and our dowsing work by selecting the optimal place to place the disc.

The Hartmann grid has one of its most powerful points at one of the angles that the Hartmann network forms. We can test with rods, pendulum, biotensors or the Lecher antenna which of these points is the most important in our space and where we should place the harmonizing disk. It is generally placed inside the house, that is, with the symbol facing the interior of the space to be harmonized because we want the information that begins to circulate through the grid to be that reflected by the power of the Phi, the golden number and the Golden Vibration that brings this symbol.

We can also use this harmonizing disk without using Hartmann lines, simply testing which is the optimal place in the space we are analyzing to place the disk and which is the optimal orientation by turning the disk on its axis until we find the orientation that will raise the vibration of the disk. space, it will harmonize and resonate with the Golden vibration of the golden number and the Phi symbol.

It is possible that to harmonize a whole house more than one disc is necessary, which we can test with a pendulum, rod, antenna or biotensor. 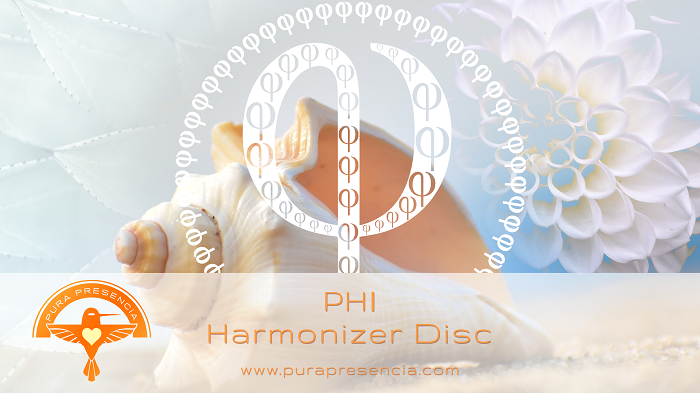 The Greek letter Phi, the number and the golden ratio reoresent the divine perfection that exists in both microcosmic and macrocosmic nature. This symbol has a long and mysterious history. Some have associated it with the Egyptian Ankh, others with the sculptor Phideas, designer of the Greek Parthenon. Used by architects, painters, sculptors, designers, appreciated by lovers of beauty, explored from mystery schools, scrutinized from the science of mathematics, geometry, Phi remains an undiscovered enigma today.

For us at Baj-Pendulos Pura Presencia, Phi is at the very heart of dowsing, since Phi, the highest representative of aesthetics in terms of Beauty and its forms (vibrations), returns us to the very origins of Dowsing and its definition: “radium” and “aesthesia” (sensory perception of radiation). Phi describes the union of the square and the circle, connected with the number 5 and also with the 3 and 1, in sacred geometry Phi would connect the material world with the spiritual, the transcendental world that is unknown to us. The great pyramid of Egypt would embody part of this mystery because its proportions correspond to the golden number. It is in PHIla-delphia in ancient Egypt where Pythagoras studied part of his studies immersed in the Egyptian Mystery Schools.

In nature, it is the symmetry of the five sides of the pentagon that, like a fractal, is reproduced in leaves, flowers, plants, regrouping of similar elements in search of Divine harmony and perfection.
In geometry, the Platonic solids also respond to the golden ratio, the Chinese theory of the Five Elements is also framed in what has been called the Phi cycles of Nature following harmonic rhythms. Vortexes, spirals, so present in dowsing, respond equally to Phi, the Universal form used by Nature, as its language, its way of communicating with us.
The Greek letter Phi, due to its physical form, also reminds us of the Circle and the Radius or the rod, the vertical axis, the magnetic of the Earth, the manifest world and the sacred rod, the vertical, electrical divine connection. Phi is a symbol that balances the cosmo-telluric axis and is used in some schools of geobiology as a solution to harmonize spaces and solve geopathic problems. The form of Phi, like a Circle or a Zero and a One, speaks directly to us of the Source manifesting in Matter.

Important: Disc does NOT include wooden base  no longer available.

–Made by Pura Presencia ™ with loving conscious hands–