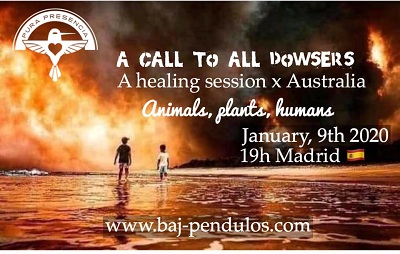 WE CALL ALL DOWSERS TO UNITE THEIR PENDULUMS IN SUPPORT OF AUSTRALIA, their fauna, flora and human beings.

Group session in the distance
Date January 9, 2020
Time 19h Madrid Spain. If you cannot at that time schedule your work to join us.
Session focus: minimize the harmful impact of fire and toxic fumes, maximum protection of flora and human fauna. Support and protection for firefighters and rescue forces … and what you perceive is necessary to convey for the greatest good of all. Dowse to attract the rains and the humidity that can alleviate and contain the expansion of the fires. Work always in Harmony in relation to all the elementary forces.

Many thanks to all for your participation. Those who do not use pendulums pray or meditate focusing your intentions in support of Australia and its people and Nature ?❤️

We connected with the Aboriginal Elders, Australia, the land, the spirit of Fire asking for permission to work with them. Once permission was obtained, the first thing Australia asked us to do was work with the Chaga pendulum, which is a vibration of the ascended fungus capable of communicating with trees and all of nature. We transmit its benevolent and regenerating vibrations to the entire affected area and to all the beings that needed it.
Next we discovered that at the bioenergetic level the problem is an imbalance of Regeneration, difficulties to renew, regenerate in a benevolent way and without causing havoc. We communicate with the Spirit of Fire who told us that his virulence is an expression of the frustration it feels (The fire) for the anger held within Humanity, all of it not only of the inhabitants of Australia. I understand that it is repressed anger. Next we worked eliminating six blocks in Australia directly affecting the fire situation.

These blocks were related to karmic problems, ties with past situations, energy toxins in search of liberation. The fire is touching the genealogical trree of all mankind and it is very possible that Australia was largely one of the first trees of Life that existed. We worked these blockages with the Akasha pendulum.

After correcting these , we were asked to focus on the Water element requesting for its arrival in the most benevolent way for the greatest good of all. We worked this with the Universal Pendulum. Once we finished this, our work ended. The level of frustration of the fire that was at a 10/10 had dropped to 1/10 after the session but the fire did not want us to reduce it to a 0/10 because he wants to continue transmitting a message to Humanity.

We hope that this small contribution joins those prayers and the subtle energy work of so many people in the world and contributes somehow to alleviate as much as possible the situation in Australia for the flora, fauna, humanity, the earth and the elemental forces that make up the continent.

Thank you all for your participation.