To what degree I allow others to undermine my personal Sovereignty? 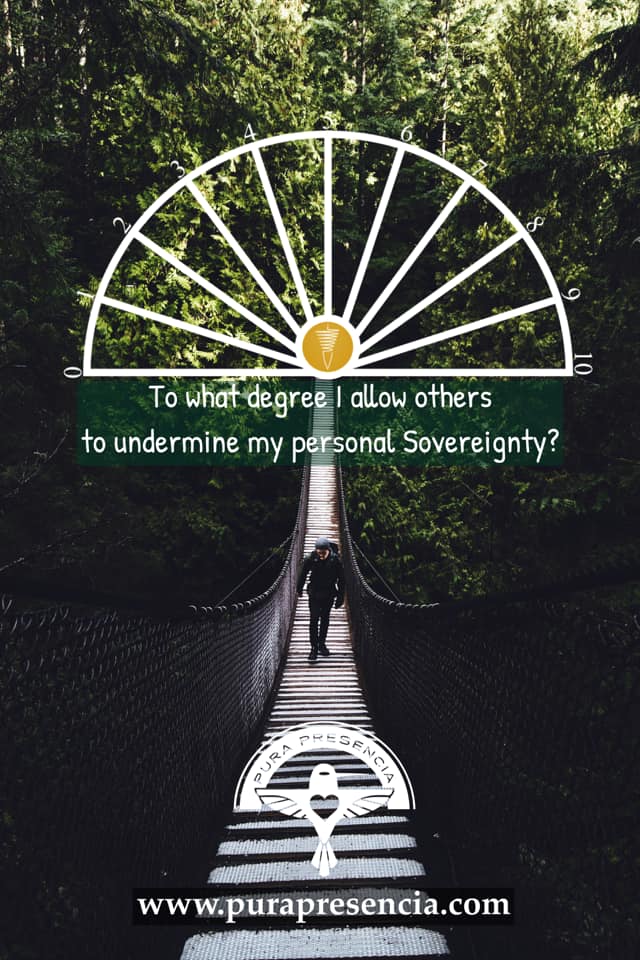 We are immersed in a psychological war, whoever does not want to see it, is sinning blind or their level of programming is so great that they cannot read the codes of manipulation.
The trick of those who are actively acting in warfare against the world’s population is: to confuse, divide, disorient, saturate, stress, traumatize, frighten, shame, ignore, infantilize, isolate and torture in various degrees, insideously.

The most frontal attack is made at the base of the Maslow Pyramid, the one in which our physical security and our survival are put in dire straight as has happened this year with the fear of the bug and the closure of businesses, commercial activities of many people due to the measures taken.
Thus, there is no possibility of rising to the apex of the personal pyramid, there where we update ourselves because we have conquered the peak of our human achievements, where we find ourselves, our spirituality and we perceive ourselves connected to the Whole, fully flowing in our creativity and personal sovereignty.

Hitting us on the Achilles heels, they cut off the base of our pyramid and we plummet or so they want, causing us to fall and lower the vibration of the entire planet with our FEAR and WORRY, the two emotions that have been promoted ad nauseam through the construction of YOUR NARRATIVE of the facts that we are witnessing and “suffering” this year.
With fear and concern, they seek that we generate nervousness and HATE against each other, so that as a single Humanity that we are, we divide and attack each other by social classes, classes, political ideologies, money in the bank, job position, place of residence, sex, skin color, age.

In fact, they have managed to ensure that with minimal police intervention, citizens spy on and monitor each other to see if they put on / stop wearing the masks, go out or not on the streets at times prescribed by experts that are often non-existent. of the governments of the day. A complete success.
In addition to these dense emotions, they seek to foster FRUSTRATION and anxiety in people in order for them to enter a state of internal FRAGMENTATION that prevents them from connecting information, discovering clues, reading between the lines and freeing themselves from the programming they impose. That fragmentation promotes self-isolation, the inability to balance at the top of Maslow’s pyramid of our personal development, blocking our actualization and spiritually our “ascension” since we are too busy thinking about how to survive from day to day. In such a state, it is impossible to see HIS TRICKS, his strategies, his plans and we only feel compulsively pushed to obey the father figure that we have projected onto the states, supposedly benevolent, the experts, supposedly benevolent that of course, we think innocently, want our greatest good.
With this, many people are at home WAITING … reading the press, the comments of the related videos of the social networks that continue, verbalizing their indignation as they can but definitely WAITING for something to happen from the outside that comes to an end to their misery.
Wait, wait, wait, frustration, frustration, frustration …

It looks like a whiting that bites its tail, it looks like the same old wheel, the same old prison where the little rats keep pedaling in the hope that that wheel will take them out of their little prison that is getting narrower each time …
And what is the way out of this? we can ask ourselves …
And the answer is as simple as it is revolutionary. There is NO exit because there was NEVER entry. You were deceived by telling you that you have no power, you were deceived by telling you that you are small, without resources, dependent … You were deceived with this, the other thing from beyond.
The truth is that: you are powerful, you have the Universal mind in you with all its solutions to the problems that may arise. You have full internal resources if you open yourself to explore them, to give yourself permission to express them in your life. You have everything as long as you dedicate some of your time to acting, planning, preparing, conceiving, imagining, visualizing, expressing while reducing the hours you spend cultivating frustration, fear, worry and complaint.
You can do everything but you have to want it and you have to start walking. There is no other. No one is going to walk your steps for you, only you can do it.
Do not allow yourself to be sunk by the insidious contamination of your existence by the forces that seek to corrode and dynamite your capacity for sovereign and free action. They are masters in tempting you to inaction, complaining, laziness.
Do not fall for that! Strength and courage, everyone up, we can overcome this !!!